Lalit Kumar, Pass Out student of IHM Shillong Batch  2004-2007 in an Interview with an Indian American News


French and Mediterranean to Arabic, Indian to Cajun: a cook for all seasons
October 28, 2013
Willard’s sous-chef Lalit Kumar has shuttled around the world.

WASHINGTON, DC: One of the famous landmarks in all of Washington, DC, is also one that is often overlooked – the Willard Intercontinental Hotel. Situated mere walking distance from the White House, the original structure of the hotel was built in 1816, nearly 200 years ago. Since then, it has grown both in size and prestige, playing host to everyone from Hollywood celebrities to foreign dignitaries, and even US presidents. 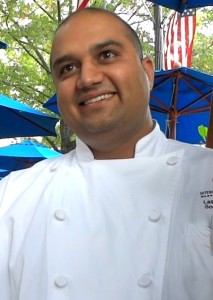 Located within the Willard is the Café du Parc, a French restaurant that is considered one of the best of its kind in the nation’s capital. And the most unusual thing about this restaurant is that its sous-chef – the second-in-command of a kitchen who occupies the duties of the executive chef when he or she is unable to – is an Indian: Lalit Kumar.

Kumar was born and brought up in New Delhi, where an appreciation and inquisitiveness about culinary arts was instilled in him at an early age, and the desire to become a chef.

“Delhi is a very rich city. Most of the cultures of India come together there because it is the capital, so it’s very foodie. You walk on the street somewhere and you can get all kinds of different foods. So growing up in that kind of environment steered me towards becoming a chef,” he said in an interview to The American Bazaar.

After graduating from the Institute of Hotel Management, in Shillong, in 2007, he received a scholarship to do his Masters in International Hospitality Administration in Nimes, France.

“I went all the way from Shillong to the south of France,” Kumar recollected. “I was doing my Masters there, and side-by-side I was also working in a French pastry shop,” a skill that would prove to be vital to Kumar’s culinary arsenal during his career.

Kumar’s next job took him to New Orleans, a place that is highly influenced by French culture but still presented quite a challenge.

“I came to New Orleans in 2009 on an internship, and that was the beginning of my professional relationship with the Intercontinental hotel chain,” Kumar said. “[New Orleans] was a completely different food culture, very different from French and Indian cuisine. Down there, the culinary style is Cajun and Creole, which is a fusion mainly of American and African cuisines, [with] some elements of other cuisines sort of mixed in here and there.”

Shifting gears completely yet again, Kumar took a transfer within Intercontinental in 2010 and worked at their hotel in Dubai, where he stayed for a year and a half. “There I cooked mainly Arabic and Mediterranean food, so it was another different culture for me,” he explained, “but it helped me develop skills I would not have gotten had I stayed in New Orleans or gone anywhere else.”

Kumar seems amused at how varied his relatively young career has been so far, taking him from all around the world in less than a decade. “I started with Indian food, moved to French food, [then] Cajun, Creole, and then Arabic and Mediterranean – it’s been kind of an adventure.”

After his time in Dubai, Kumar came back to New Orleans in 2012, where he became a sous-chef at the Intercontinental Hotel there. He spent a year in New Orleans, learning the ropes of his new position, before coming to the Willard in February of this year.
But after working in all sorts of exotic places like southern France and Dubai, why come to Washington, DC?

“Because the Willard Hotel here and the Intercontinental in Paris are two of the best [and] most beautiful properties in the world,” Kumar said. “I always had a dream of coming to Willard, and that dream came true in February when they had a position available here. So I jumped at it.”

Although Kumar officially works for Café du Parc, he does a lot of banquet work for the Willard Hotel itself. When dignitaries and celebrities stay at the Willard, Kumar is often called upon to put his encyclopedic culinary knowledge to use in the kitchen, helping to keep the Willard’s sterling food reputation intact.

“I did an Indian showcase for [the Willard] soon after I got here, which is where you cook all sorts of Indian food to show them what you can do, but then when they found out about all the places I’ve been to and how many types of food I’ve cooked, I started working more at the banquet halls making international food.”

When it comes to the type of food Kumar enjoys cooking the most, he says he loves creating dishes that blend together Indian, French, and American culinary sensibilities. “For example, pasta with tandoori chicken, or French sweet bread dusted with curry powder, or different types of Indian curries going with different types of American fish.”

April through November is typically the busiest time at Café du Parc, which receives an enormous number of guests on a daily basis.
“We get about 200 [patrons] for breakfast, 150 for lunch, and 120 for dinner. But we also serve an afternoon menu, which is after lunch but before dinner, and that’s usually about 80. So that’s like 450-500 every day,” he said.

At such a young age, Kumar has already come far in life, having already served the likes of Sachin Pilot, Ban Ki-Moon and George Clooney, among others.

Kumar also got married last year, with his one-year anniversary coming up in November.

“My wife sometimes gets mad that I cook all day at work and then come home and cook for her,” he jokes, “ but when I go back home to India my mother never even lets me into the kitchen!”

Kumar says he’s happy where he is, and wants to continue on at the Willard for the next several years before deciding what to do next, keeping open the possibility of one day opening his own restaurant.

So what does an aspiring young chef need to do in order to have as varied and successful a career as Kumar has had? “Be calm and have patience,” he says. “Those two things are critical. When the restaurant is busy and so many things are going on, if you lose your patience then that’s the end.”